Area 11, Handbell Musicians of America is proud to spotlight ensembles that have made their mark (not mart!) in Area 11.

Each newsletter we will be moving the spotlight across our five states to highlight ensembles in religious, community, and educational programs.  Thank you to these ensembles for their dedication to advancing the art of handbell ringing throughout Area 11. 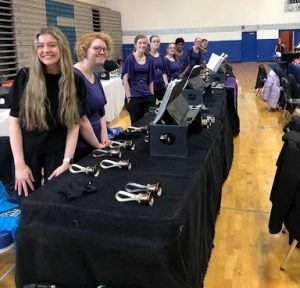 Riverton High School’s Bell Choir has enjoyed ringing since 1999 when the school opened. Originally started by LeAnna Willmore as she opened the school’s choir program, there have since been two other directors: Tricia Martindale, and the current director Mathew Ulmer. We always have a mix of students from 10 – 12 th grades, and will involve any interested students regardless of music background.

Riverton Bell Choir’s performance schedule includes regular appearances with the Riverton Vocal choir program in their quarterly concerts, and frequent invitations to perform in the community during December Holiday festivities. The Choir is so happy to be renewing Holiday performances after the pandemic, ringing for church and business parties, retirement centers, and this year feels honored to do some fun combination concerts with the Bluffdale community Interfaith choir, and with the Bells of Joyful Sound. And last but not least, Riverton’s Bell Choir enjoys yearly participation in Utah’s Spring Ring, and has been pleased to host the event many times and looks forward to doing so again this year. See you all there in March 2023! 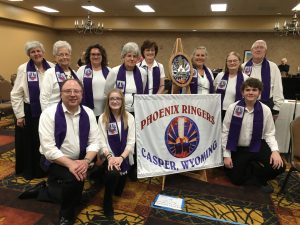 Carolyn Deuel approached the Session of the First Presbyterian Church of Casper, WY, about
starting a handbell choir in 1981. Many people helped with the purchase of the bells, and the
Jubilate Ringers began making beautiful music! Later, a youth handbell choir was added.

Collaborations with the handbell choirs of the First United Methodist Church and the First Christian Church brought Ring Noel and Wyoming Spring Events to the community, and Highland Park Community Church also participated.

In 1987, Carolyn left the Presbyterian Church when Administration decided to split her
organist/choir director/bell director job and expected her to stay as organist only. Several of
her ringers stayed with her, and for a year, George Cannon welcomed their rehearsing at the
First United Methodist Church. Then, Arch and Janis Deuel, Carolyn’s parents, gifted her with
five octaves of Schulmerich Bells, since it was obvious the bell choir, by then already a
community choir, was going to continue. Thus, the Phoenix Ringers came to be.

The Phoenix Ringers play the gathering music for the December Festival Choir &amp; Orchestra
Concert at Our Saviour’s Lutheran Church and perform for other church and community groups.
The Wyoming Spring Ring, organized by Carolyn and her brother, Dana Deuel, Director of the
Koinonia Ringers of the First United Methodist Church, regularly draws ringers from Colorado
and Wyoming, with some participants from Nebraska, Utah, and other states.

Sally Reinhart, from the original 1981 choir, still rings, and several others have rung for decades.
Others have begun in the last two years, including two high school youth. All of the members
play other instruments or began playing bells in college, so reading and making music together
are joyful collaborations! 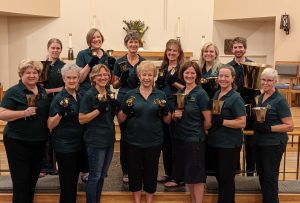 Denver Bronze is an auditioned community handbell ensemble under the direction of Paul Gentry, Artistic Director. The group was founded in 2006 and auditions are held every summer for the next year’s group. Our missions statement is: Denver Bronze is dedicated to musical excellence and service to the community through artistic handbell performance and educational outreach. We are based in the South Metro Denver Area, and our group rings on 5 octaves of handbells plus the G2 and C2 bells, and 5 octaves of chimes. We have performed in numerous venues including the Holiday Lighting Ceremony in downtown Denver, concerts through out the south side of Denver, numerous area libraries, Denver Botanical Gardens, weddings, and private parties, as well as senior facilities and assisted living facilities.

Our group is supportive to Area 11 in numerous ways. We have hosted several Ringers’ Roundups and Super Bell Saturdays. Several members have actively worked on planning committees for different festivals in Colorado, as well as Area Festivals. And members have done workshops and educational activities with groups in the area who request it. Denver Bronze has 2 members who are Past Chairs for Area 11, and one who is a past Colorado state chair.

One of the most fun activities for our group was playing at the Area 11 Festival in Albuquerque, New Mexico in 2018. We highly recommend playing for other handbell groups. Although stressful (because they know what you should be doing) it’s incredibly rewarding because they can also appreciate what you are doing! Check out our website and you can find links to videos there. We also have a Youtube Channel. 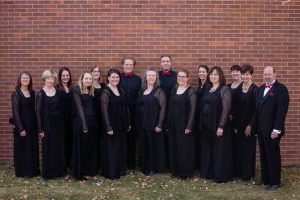 Bells of the Rockies is the premiere handbell ensemble in the Northern Colorado area, founded by Michael Kastner. We are an established group who strives for excellence in all aspects of handbell ringing, from technique, musicality to presentation. It is the goal of the group to create a positive, emotional experience for the audience for which they are glad they came.

We love to collaborate with other musicians and instruments and the creative process with other media. We are passionate about ringing and we enjoy ringing with each other! We look forward to participating in Handbell festivals when we can.

We are under the direction of Marvin Crawford. Please enjoy a snip it of a song we presented at our last Christmas concert. Please join us for our upcoming Holiday concerts December 17th in Greeley, and December 18th in Loveland.

Please go to our website for further details about our group, the members, and concert information. Please follow us on Facebook for early notifications of our activities. We have an exciting campaign starting soon!

Bells of Praise, one of three bell choirs at Mountain View Lutheran Church in Phoenix, Arizona, came into existence in the late 80s. They started with only 3 octaves of Schulmerich bells, grew to 5 octaves and just recently acquired the lower 6th and 7th octaves of Malmark handchimes, completing their set of C2-C8! Mondays are rehearsal nights and the choir typically plays the last Sunday of the month and special Church Sundays and festivals.

Bells of Praise is always excited to be asked to play at the Desert Botanical Garden’s Luminaria Event, Apache Junction Public Library, Retirement Centers, and they even staged a Flash Mob around a Salvation Army Christmas Ringer! And that is the nuts and bolts of this choir…NOW for the interesting stuff!

This choir is its own family! They pray for each other and share in one another’s triumphs and sorrows. Vacations are planned around the bell schedule. They celebrate each other’s birthdays and bring in the BEST goodies. These ringers are compassionate and so very funny!

Some of them are engineers, some are teachers, social workers, pharmacy techs, accountants, some are grandparents while others are starting their life’s journey. Some are really tall and some are pretty short, but every single one of them is an accomplished musician. They are passionate about their bell time and are diligent about rehearsals and performances and presenting their very best. They barely squawk when the director asks them to do something out of the ordinary! They are by far the BEST group of musicians around. How do I know all this? I am their director and I am humbled and proud to be a part of this fantastic group! – Leslie Franzmeier 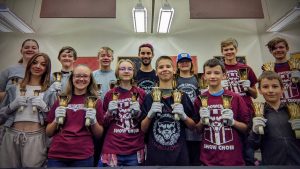 Willowcreek Ringers was established in September 2021. Lehi city has a rich history of secondary school handbell choirs. For years, our sister schools (Lehi Junior and Skyridge High) have had thriving handbell choirs and we are proud to finally join them in the fun!

Our director, Carl Johanson, hails from Gainesville, Florida but came to Utah to study music composition and music education at BYU Provo. There he received both a bachelor’s and a master’s in choral music education with a strong emphasis on sight singing/ringing. He has been married for 10 years and has two amazing 5 year old twin boys and a two year old daughter. In his spare time, he enjoys playing piano, writing music, playing video games, camping, hiking, sewing, sketching, and cooking.

Our ensemble this year has 13 members ringing 4 octaves together. On top of an annual Christmas concert and Spring concert, every October and February we also put on a joint concert with all of our neighboring secondary schools in Lehi. We play many styles of music including classical literature, sacred arrangements, pop songs, and even video game music. During rehearsals, we spend a lot of time not just learning songs to perform, but also how to ring with healthy technique and how to read music. Our ringers are never assigned to the same bells for each song to give each member an opportunity to ring in all the octaves.

With our motto being “Inspiramus, Discimus, Insumus” (We Inspire, We Learn, We Belong) all who enter our program become lifelong learners and musicians whether or not they pursue music as a profession or a hobby.