Our one day festival welcomes Dave Harris as our clinician for this mass ringing event! We return to Fremont High School in Ogden. With 6 mass pieces for all to enjoy! Ringers must purchase the music in advance.

Box lunches available to order ahead. Proceeds will benefit the Area 11 youth fund. 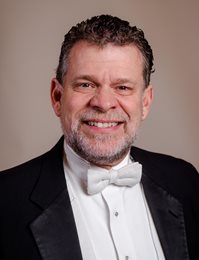 $20 per ringer for Members of the Handbell Musicians of America and their affiliated members.

$30 per ringer for non-members.

Not a member? Join here .

Box lunches will consist of a meat sandwich with lettuce and tomato, chips, pickle, cookie and drink. Vegetarian or gluten-free option available.

The proceeds from  box lunch sales will go into our Area 11 Youth Fund to help offset the cost of Young Ringers Camps, youth scholarships, and future Area 11 events for our youth.

When you complete the registration form, it will be sent to the Area 11 Event Chair, Mary Moffett.

Enter the Grand Total into the PayPal. PAYMENT ALONE DOES NOT MEAN YOU’RE REGISTERED!  Don’t forget to submit the form and your payment.

You may also send your registration and lunch fees to: (check payable to  Area 11)

Registration Deadline is February 28, 2022. All fees must be received by this date to ensure a spot!

David M. Harris is in his 33nd season as the music director of The Raleigh Ringers, an internationally-recognized touring handbell ensemble based in Raleigh, NC. David was instrumental in the formation of this auditioned choir in 1990. Under his leadership, The Raleigh Ringers have performed in France and England; on International Television on the “Hour of Power” program; as a showcase choir for the Handbell Musicians of America National Seminar and Area Festivals; with the North Carolina and Virginia Symphony Orchestras; and as special guest performers at the Chautauqua Institution in
Chautauqua, New York. The Raleigh Ringers are in constant demand as featured guest performers for various artist series and handbell festivals around the country.

David is a graduate of The Pennsylvania State University and has studied conducting privately with Dr. William A. Payn (Bucknell University). He has served The Handbell Musicians of America in several capacities: as All-Star Conductor, Ringing Track Conductor and Instructor for the National Seminar; as clinician for numerous Local and Area Festivals and Workshops; as North Carolina State Chairman; and as Area III Treasurer. Because of his strong interest in the development of community handbell programs, David served as chairman for the first ever Handbell Musicians-sponsored event for community ringers entitled, “Pinnacle 2000”, held in Las Vegas. David and The Raleigh Ringers developed and sponsor the biennual event, “Virtuoso”, a
performance-focused event for advanced ringers. In addition, David has led well over 200 handbell festivals and workshops in 36 states as well as in England, Puerto Rico, Canada and the Caribbean. He has also been the primary handbell clinician for several denominational music events, including Montreat (NC), Lake Junaluska (NC), Lutheridge (NC), Mo-Ranch (TX) and Massanetta (VA). David is also one of the co-founders of the very successful Capital Area Handbell Festival, held annually in Raleigh. He has written several articles for Overtones, the national publication of The Handbell
Musicians of America.

A maximum of 6 individual choir solos will be allowed. This is on a first come, first serve basis.

All details regarding the piece will need to be communicated no later than January 31, 2022. utahspringring@gmail.com